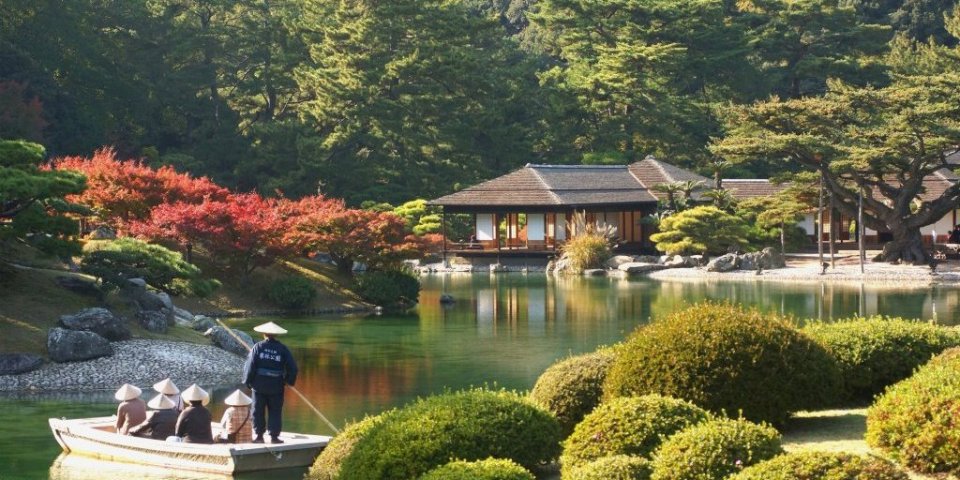 This is a four-day and three-night course that takes you around classic and must-see tourist spots in Shikoku and then allows you to appreciate art (e.g., the Setouchi Triennale)
START
10 minutes on foot from Tokushima Station

Board a whirlpool sightseeing boat

The magnificent whirlpools in the Naruto Straits can be enjoyed from several vantages. One option is the observatory built below the Naruto Bridge, offering a variety of views through glass viewing panels from a height of 45m above the sea. For an up-close and personal view of the whirlpools, why not try taking a ride on one of the regular sightseeing boat trips available?
4

180-minute visit and lunch
Home to the largest permanent exhibition space in Japan, this museum houses vivid, full-size reproductions of masterworks of Western art on large ceramic boards. The museum collection of more than 1000 works was selected from 190 museums in 25 countries to show the development of Western art from antiquity through to modern times.
6

45-minute visit
The magnificent whirlpools in the Naruto Straits can be enjoyed from several vantages. One option is the observatory built below the Naruto Bridge, offering a variety of views through glass viewing panels from a height of 45m above the sea. For an up-close and personal view of the whirlpools, why not try taking a ride on one of the regular sightseeing boat trips available?
70 minutes by car
7

120-minute visit
Ritsurin Garden is a daimyo (feudal lord) garden, which was completed in 1745 over a period of one hundred years. Designated as a Special Place of Scenic Beauty, this spacious garden features 6 ponds and 13 landscaped hills. While strolling you can enjoy the changing landscape, therefore it is said that the variety of scenery has the attraction of "ippo ikkei" or a change in scenery with every step. In the garden there are buildings, such as Kikugetsu-tei teahouse, where you can have matcha (powdered green tea) while viewing the picturesque landscape, and the Sanuki Mingeikan (Folk Craft Museum), where Sanuki folk crafts are exhibited. You can also enjoy a ride on a Japanese boat, the “Senshu maru”.
8

The Seto Inland Sea has been a vital transportation route since ancient times. Ships plying its waters stopped at different islands where their crew passed along the latest cultural and lifestyle trends. The distinctive local cultures that emerged through such interactions can still be found today. The islands’ unique identities, however, are being eroded by the shrinking and aging of their populations and the diminishing vitality of the region, which have accompanied the acceleration of globalization, optimization and homogenization. Through the Setouchi Triennale, we aim to revitalize island communities that once thrived within the spectacular setting of the Seto Inland Sea, a nexus of trade and cultural exchange, and transform this region into a Sea of Hope for the world.

90-minute visit
Matsuyama Castle, in the style of the Momoyama period, is one of Japan’s few original surviving castles. Its 21 buildings are listed as Important Cultural Properties, and the castle is regarded as one of the three best ‘Renritsu-shiki Hirayama-jiro’ (Renritsu-shiki: an architectural style where the top castle tower is in the centre with smaller towers on either side; Hirayama-jiro: a castle built on a hill on a plain). The towers are all connected to defend the main castle building. The castle is a well-known symbol of Matsuyama and is written about in the prologue of the novel, “Clouds Above the Hill” by Ryotaro Shiba. It has been and will be guarding the city of Matsuyama for centuries!
15 minutes by car
14

60-minute visit
This temple is No. 51 of the 88 temples of the Shikoku Pilgrimage. Many tourists come to visit the famously mysterious temple in addition to those on the pilgrimage. The temple is home to a number of famous buildings such as the Niomon Gate, a designated national treasure, and the temple’s main hall, bell tower and pagoda, designated Important Cultural Properties. Other popular sights include a goddess for safe childbirth, a treasure house, the Mantra cave, and an inner temple. There is something for everyone at Ishite-ji and something new to discover with each visit.
GOAL
View course map